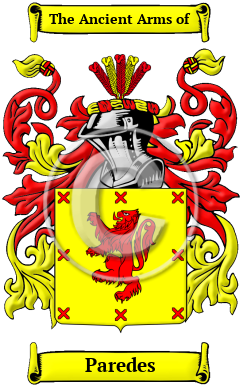 Spanish, Galician and Portuguese: topographic name for someone who lived in a lean-to built against the wall of a larger building, from Spanish "pared," Portuguese and Galician "parede" (house) wall. Servants often lived in buildings of this sort outside manor houses, and masons constructed huts of this kind on the site of their labors, making temporary use of the walls of the new building. There are also numerous places named with this word, and the surname may also be a habitational name from any of these.

Early Origins of the Paredes family

The surname Paredes was first found in Asturias, where they are said to have come fro the House of Miranda. One "casa solar," or ancestral seat of this family has is in a parish of Paredes, l distict of Luarca.

Early History of the Paredes family

This web page shows only a small excerpt of our Paredes research. Another 77 words (6 lines of text) covering the years 1466, 1534, 1618, and 1645 are included under the topic Early Paredes History in all our PDF Extended History products and printed products wherever possible.

Spelling variations of this family name include: Paredes, Pereda, Parades and others.

In the United States, the name Paredes is the 3,750th most popular surname with an estimated 7,461 people with that name. [1]

Paredes migration to the United States +

Paredes Settlers in United States in the 19th Century

Paredes Settlers in West Indies in the 19th Century