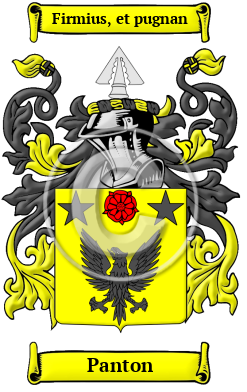 Early Origins of the Panton family

The surname Panton was first found in Lincolnshire, at Panton, a village in the civil parish of East Barkwith, in the East Lindsey of district. The village dates back to the Domesday Book of 1086 where it was listed as Pantone and possibly meant "farmstead near a hill or pan-shaped feature" from the Old English words "panne" + "tun." [1] At that time, there were 32 households on 40 acres of meadows with a church, land held by the Archbishop of York. Conjecturally the family is descended from Gilbert of Panton, a Norman noble who held the village at that time. [2]

Early History of the Panton family

Another 36 words (3 lines of text) are included under the topic Early Panton Notables in all our PDF Extended History products and printed products wherever possible.

In the United States, the name Panton is the 14,800th most popular surname with an estimated 2,487 people with that name. [4]

Panton migration to the United States +

Panton Settlers in United States in the 17th Century

Panton Settlers in United States in the 18th Century

Panton Settlers in United States in the 19th Century

Panton Settlers in Australia in the 19th Century

Panton Settlers in West Indies in the 17th Century