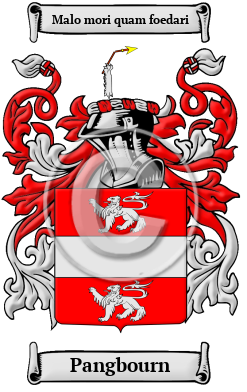 The distinguished surname Pangbourn is of ancient English origin. It is derived from "Pangbourne," the name of a town in the county of Berkshire, and is thought to mean "Paega's stream."

Early Origins of the Pangbourn family

The surname Pangbourn was first found in the county of Berkshire, where the family held a family seat from ancient times. It is likely that the progenitor of the name was a native of Pangbourne, in the hundred of Reading, a large village and civil parish on the River Thames. The parish takes its name from a trout stream called the Pang, which runs through it. In October, 1838, excavators for the railway, at Shooter's Hill, found five human skeletons, of Roman vintage including spearheads, spurs, and battle-axes of British and Roman manufacture, urns of terra cotta, and a large quantity of coins of various Roman emperors.

Early History of the Pangbourn family

This web page shows only a small excerpt of our Pangbourn research. Another 81 words (6 lines of text) covering the years 1185, 1273 and 1640 are included under the topic Early Pangbourn History in all our PDF Extended History products and printed products wherever possible.

Pangbourn has been spelled many different ways. Before English spelling became standardized over the last few hundred years, spelling variations in names were a common occurrence. As the English language changed in the Middle Ages, absorbing pieces of Latin and French, as well as other languages, the spelling of people's names also changed considerably, even over a single lifetime. Spelling variants included: Pangborn, Pangburn, Pangbourne, Pangborne, Pangburne, Pangeburn and many more.

More information is included under the topic Early Pangbourn Notables in all our PDF Extended History products and printed products wherever possible.

Pangbourn Settlers in Australia in the 19th Century