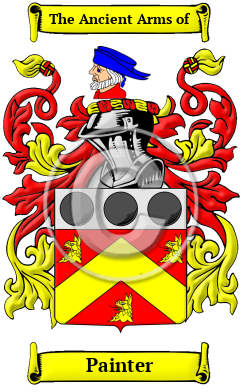 The distinguished surname Painter originated in Cornwall, a region of southwest England that is celebrated in the Arthurian romances of the Middle Ages. Though surnames became common during medieval times, English people were formerly known only by a single name. The way in which hereditary surnames were adopted in medieval England is fascinating. As the population of Europe burgeoned, people began to assume an extra name to avoid confusion and to further identify themselves. Under the Feudal System of government, surnames evolved and they often reflected life on the manor and in the field. Despite the fact that occupational surnames are rare among the Cornish People, they nevertheless sometimes adopted surnames derived from the type of work they did. The surname Painter was an occupational name for a painter. Painter is an occupational surname, which belongs to the category of hereditary surnames. Occupational surnames were derived from the primary activity of the bearer. In the Middle Ages, people did not generally live off of the fruits of their labor in a particular job. Rather, they performed a specialized task, as well as farming, for subsistence. Other occupational names were derived from an object associated with a particular activity. This type of surname is called a metonymic surname. The surname Painter comes from the Old English word peintour, which means painter.

Early Origins of the Painter family

The surname Painter was first found in Cornwall where "Boskennal and Boskenna both belong to John Paynter, Esq.; but the latter, which formerly belonged to the Carthews, is his place of residence. This family of Paynter, which was originally of Deverel in Gwinear, and afterwards of Trelisick in St. Erth, has been settled here ever since the reign of Charles II." [1]

Early History of the Painter family

This web page shows only a small excerpt of our Painter research. Another 74 words (5 lines of text) covering the years 1540, 1594, 1637 and 1716 are included under the topic Early Painter History in all our PDF Extended History products and printed products wherever possible.

Cornish surnames are characterized by a multitude of spelling variations. The frequent changes in surnames are due to the fact that the Old and Middle English languages lacked definite spelling rules. The official court languages, which were Latin and French, were also influential on the spelling of a surname. Since the spelling of surnames was rarely consistent in medieval times, and scribes and church officials recorded names as they sounded rather than adhering to any specific spelling rules, it was common to find the same individual referred to with different spellings of their surname in the ancient chronicles. Moreover, a large number of foreign names were brought into England, which accelerated and accentuated the alterations to the spelling of various surnames. Lastly, spelling variations often resulted from the linguistic differences between the people of Cornwall and the rest of England. The Cornish spoke a unique Brythonic Celtic language which was first recorded in written documents during the 10th century. However, they became increasingly Anglicized, and Cornish became extinct as a spoken language in 1777, although it has been revived by Cornish patriots in the modern era. The name has been spelled Paynter, Painter and others.

Another 37 words (3 lines of text) are included under the topic Early Painter Notables in all our PDF Extended History products and printed products wherever possible.

In the United States, the name Painter is the 1,460th most popular surname with an estimated 19,896 people with that name. [2]

Painter migration to the United States +

Painters were some of the first of the immigrants to arrive in North America:

Painter Settlers in United States in the 17th Century

Painter Settlers in United States in the 18th Century

Painter Settlers in United States in the 19th Century

Painter Settlers in Australia in the 19th Century

Painter Settlers in New Zealand in the 19th Century

Historic Events for the Painter family +