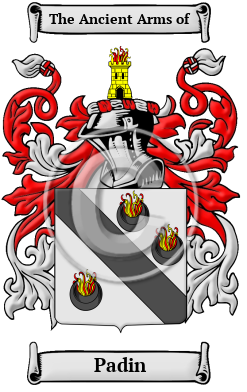 Early Origins of the Padin family

The surname Padin was first found in Dumfriesshire (Gaelic: Siorrachd Dhùn Phris), a Southern area, bordering on England that today forms part of the Dumfries and Galloway Council Area, where they held a family seat from early times and their first records appeared on the census rolls taken by the ancient Kings of Scotland to determine the rate of taxation of their subjects.

Early History of the Padin family

Notable amongst the family at this time was Alexander Peden (1626-1686), also known as Prophet Peden, one of the leading forces in the Covenanter movement. After the Restoration of Charles II, Peden had to leave his parish under the Middletons Ejectment Act in 1663. For ten years he wandered far and wide, bringing comfort and succor to his co-religionists, and often very narrowly escaping capture, spending some of his time...
Another 69 words (5 lines of text) are included under the topic Early Padin Notables in all our PDF Extended History products and printed products wherever possible.

Migration of the Padin family to Ireland

Some of the Padin family moved to Ireland, but this topic is not covered in this excerpt. More information about their life in Ireland is included in all our PDF Extended History products and printed products wherever possible.

Migration of the Padin family