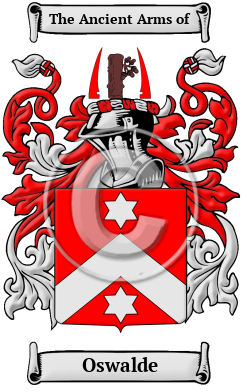 The name Oswalde evolved in ancient Germany in the state of Bavaria. It is a patronymic name. Patronymics are derived from the given name of the father of the bearer. Names derived from the name of the mother of the bearer, which are less common, are called metronymic names. Patronymic names were generally formed from traditional, German given names, rather than the names of saints or biblical figures, as is the custom in many other European cultures. Oswalde comes from a famous king of Northumbria. It was popularized as a first name after King Oswald, who lived in the 7th century, and who traveled from Scotland to southern Germany and Tyrol as a missionary. Oswalde had begun to be taken on as a last name by around the 12th century.

Early Origins of the Oswalde family

The surname Oswalde was first found in Bavaria, where the name could be considered to make a great early contribution to the feudal society which became the backbone of early development of Europe. The name became prominent in local affairs and branched into many houses which played important roles in the tribal and national conflicts, each group seeking power and status in an ever changing territorial profile. Chronicles first mention Claus Oswald of Wuerttemberg in 1493, and Hans Oschwald in 1392. The name became popular as a first name after King Oswald of Northumbria (d.642 A.D.) traveled from Scottland to southern Germany and Tyrol as a missionary. It was taken on as a last name by around the 12th century.

Early History of the Oswalde family

In the medieval era, many different cultural groups lived in the German states. There are thus many regional variations of German surnames from that era. Westphalians spoke Low German, which is similar to modern Dutch. Many German names carry suffixes that identify where they came from. Others have phrases attached that identify something about the original bearer. Other variations in German names resulted from the fact that medieval scribes worked without the aid of any spelling rules. The spelling variations of the name Oswalde include Oswald, Oswalde, Oswaldt, Oswaldte, Oswalt, Oswalte, Ostwald and many more.

Prominent among members of the name Oswalde in this period include Oswald von Wolkenstein (1377-1445), who was of knightly birth from Tyrol. A restless and energetic man, he ran away from home at the age of 10 to become a minstrel. He wandered...
Another 42 words (3 lines of text) are included under the topic Early Oswalde Notables in all our PDF Extended History products and printed products wherever possible.

Migration of the Oswalde family

European migration to North America began in the mid-17th century and continued unabated until the mid-20th. Many Bavarians made the long trip to escape poverty or persecution based on their religious beliefs. The chance for tenant farmers to own their own land was also a major drawing card. They settled all across the United States in Pennsylvania, Texas, New York, Illinois, and California. Many came to Canada also, settling in Ontario and the prairie provinces. Analysis of immigration records has shown some of the first Oswaldes to arrive in North America, and among them were: Henry Oswald, who came to Philadelphia in 1732; Carl Oswald arrived in Texas in 1855; Gottlieb Oswald came to Philadelphia, Pa. in 1867; Julius Oswald came to Philadelphia in 1856.