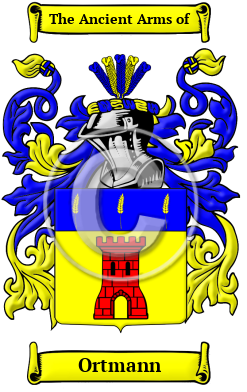 Early Origins of the Ortmann family

The surname Ortmann was first found in Silesia, where the name emerged after the 14th century, where it was related to the name "Ertmar"; this name is also reflected in the place name Erdmannsdorf, found in both Saxony and Silesia. This family name spread throughout the northern regions of Germany, and Ertwin Erdtmann is mentioned in Osnabrueck chronicles as early as 1509.

Early History of the Ortmann family

Spelling variations of this family name include: Erdmann, Erdman, Ertmann, Ertman, Erdtmann and many more.

Notables of the period with the surname Ortmann were Francis Erdmann of Saxe-Lauenburg (1629-1666), Duke of Saxe-Lauenburg between 1665 and 1666; Karl Gottfried Erdmann (1774-1835), a physician who introduced vaccination in Saxony; his son Otto (1804-1869) achieved fame as a chemist; and Johann Eduard Erdmann (1805-1892), a historian of philosophy. The Baroness Ertmann, whose maiden name was Dorothea Cäcilia Graumann, of Offenbach near Frankfort, will go down to posterity as an intimate friend of Beethoven's, and one of the most competent interpreters of his pianoforte music during...
Another 85 words (6 lines of text) are included under the topic Early Ortmann Notables in all our PDF Extended History products and printed products wherever possible.

Ortmann migration to the United States +

Ortmann Settlers in United States in the 18th Century

Ortmann Settlers in United States in the 19th Century