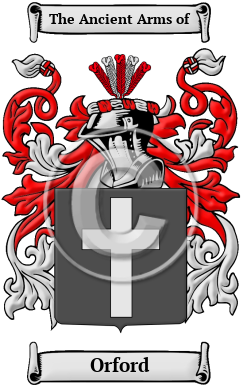 Early Origins of the Orford family

The surname Orford was first found in Suffolk at Orford, a small coastal town and fishing village that dates back to the Middle Ages. Geographically, it is best known for the Orford Ness, a long, wide shingle spit at the mouth of the Ore. Orford Castle is located in the same village and is thought to have been built between 1165 and 1173 by Henry II of England. According to the chronicler Ralph of Coggeshall, a naked wild man, covered in hair, was caught in the nets of local fishermen around 1167. The man was brought back to the castle where he was held for six months but later escaped. Thus began the legend of the Wild Man of Orford. One of the first records of the name was in the year 1191 when Richard de Orford held estates in that area.

Early History of the Orford family

More information is included under the topic Early Orford Notables in all our PDF Extended History products and printed products wherever possible.

Orford migration to the United States +

Orford Settlers in United States in the 17th Century

Orford Settlers in United States in the 19th Century

Orford Settlers in United States in the 20th Century

Orford Settlers in Canada in the 20th Century

Orford Settlers in Australia in the 19th Century

Historic Events for the Orford family +