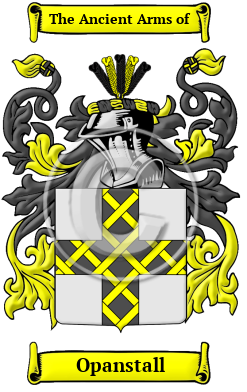 The Opanstall surname is a habitational name, taken on from a place called Openshaw, near Manchester. The place name comes from the Old English words "open," meaning not surrounded by a hedge and "sceaga," meaning a "copse," or grove of small trees.

Early Origins of the Opanstall family

The surname Opanstall was first found in Lancashire where they held a family seat as Lords of the Manor. The Saxon influence of English history diminished after the Battle of Hastings in 1066. The language of the courts was French for the next three centuries and the Norman ambience prevailed. But Saxon surnames survived and the family name was first referenced in the year 1559 when John Opensha (sometimes Openshawe) was recorded in the Manor and estates. The early records of this name have been lost but it may be presumed that it was originally Opershall which is pronounced the same and is synonymous. Today, Openshaw is a ward of the city of Manchester, in Greater Manchester.

Early History of the Opanstall family

This web page shows only a small excerpt of our Opanstall research. Another 130 words (9 lines of text) covering the years 1455, 1487 and 1607 are included under the topic Early Opanstall History in all our PDF Extended History products and printed products wherever possible.

Another 29 words (2 lines of text) are included under the topic Early Opanstall Notables in all our PDF Extended History products and printed products wherever possible.

Migration of the Opanstall family