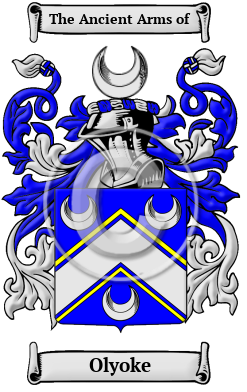 Early Origins of the Olyoke family

The surname Olyoke was first found in Leicestershire at Holy-Oakes, a liberty, in the parish of DryStoke, union of Uppingham, hundred of Gartree. Historically, a very small liberty with only a few inhabitants, but nevertheless, it was a significant home to a number of important people which we shall explore.

Early History of the Olyoke family

Olyoke has been spelled many different ways. Before English spelling became standardized over the last few hundred years, spelling variations in names were a common occurrence. As the English language changed in the Middle Ages, absorbing pieces of Latin and French, as well as other languages, the spelling of people's names also changed considerably, even over a single lifetime. Many variations of the name Olyoke have been found, including Hollyoke, Holyoke, Hollyoak, Hollioake, Hollyoak, Holioke, Hollioke, Hallioke, Hallyoke, Ollioke, Olyoke, Hollioak, Holyoak, Holyoake, Hollyhock, Hollyock and many more.

Distinguished members of the family include Francis Holyoake (1567-1653), a British lexicographer, born at Nether Whitacre, Warwickshire. "About 1582 he studied as a commoner at Queen's College, Oxford, though it does not appear that he took a degree. Afterwards he taught a school, first at Oxford, and then in Warwickshire. In February 1604 he was instituted to the rectory of Southam, Warwickshire. In 1625 he was elected a member of convocation. In 1642 he was forced from his house by the parliamentarians, his wife was so ill-used as to hasten her death, his servant was killed, and his estate...
Another 99 words (7 lines of text) are included under the topic Early Olyoke Notables in all our PDF Extended History products and printed products wherever possible.

Migration of the Olyoke family

In an attempt to escape the chaos experienced in England, many English families boarded overcrowded and diseased ships sailing for the shores of North America and other British colonies. Those families hardy enough, and lucky enough, to make the passage intact were rewarded with land and a social environment less prone to religious and political persecution. Many of these families became important contributors to the young colonies in which they settled. Early immigration and passenger lists have documented some of the first Olyokes to arrive on North American shores: Edward Holyoke, who arrived in Lynn, Massachusetts between the years 1620 and 1650; Daniel Holyoak and David Holyoak, who were both listed as British Deportees to America in 1767.