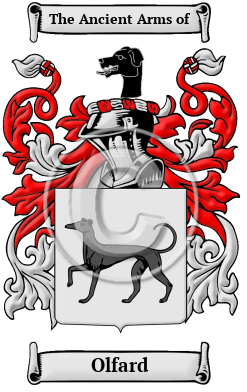 The ancient roots of the Olfard family name are in the Anglo-Saxon culture. The name Olfard comes from when the family lived in Holford, a place-name found in Somerset and Sussex. The place-name is derived from the Old English elements hol, which means hollow or valley, and ford, a shallow place where a river may be crossed by wading. Fords were very important in medieval England, as bridges were very expensive to both build and maintain. Any place where there was a ford across a river was bound to become a settlement of one sort or another, especially if it was a long way to the next ford up or down the river. In this particular case, the place-name Holford means "ford across the river in a valley."

Early Origins of the Olfard family

The surname Olfard was first found in West Somerset in the hundred of Whitley at Holford, a village and civil parish that dates back to the Domesday Book of 1086 where it was listed as Holeforde. The place name literally meant "hollow ford, ford in a hollow," from the Old English words hol + ford. [1] The River Holford which runs through the village flows to the sea at Kilve.

Early History of the Olfard family

This web page shows only a small excerpt of our Olfard research. Another 202 words (14 lines of text) covering the years 1587, 1717, 1541 and 1588 are included under the topic Early Olfard History in all our PDF Extended History products and printed products wherever possible.

One relatively recent invention that did much to standardize English spelling was the printing press. However, before its invention even the most literate people recorded their names according to sound rather than spelling. The spelling variations under which the name Olfard has appeared include Holford, Holfords and others.

Notables of this surname at this time include: Lady Elizabeth Holford, who in 1717, gave £500 in support of a school in Stanton St. John in Oxfordshire. [2] Blessed Thomas...
Another 30 words (2 lines of text) are included under the topic Early Olfard Notables in all our PDF Extended History products and printed products wherever possible.

Migration of the Olfard family

At this time, the shores of the New World beckoned many English families that felt that the social climate in England was oppressive and lacked opportunity for change. Thousands left England at great expense in ships that were overcrowded and full of disease. A great portion of these settlers never survived the journey and even a greater number arrived sick, starving, and without a penny. The survivors, however, were often greeted with greater opportunity than they could have experienced back home. These English settlers made significant contributions to those colonies that would eventually become the United States and Canada. An examination of early immigration records and passenger ship lists revealed that people bearing the name Olfard arrived in North America very early: Elizabeth Holford arrived in Annapolis, Maryland in 1729; Eleanor Holford settled in New England in 1706; Thomas Holford settled in Maryland in 1725.