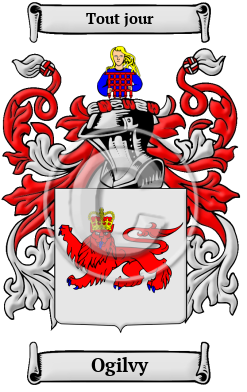 The Ogilvy surname is a habitational name from a place near Glamis, in county of Angus (present day region of Tayside), which is first recorded c.1205 in the form Ogilvin. The root of the place name is thought to be from the Welsh "uchel," meaning "high."

Early Origins of the Ogilvy family

The surname Ogilvy was first found in Angus (Gaelic: Aonghas), part of the Tayside region of northeastern Scotland, and present day Council Area of Angus, formerly known as Forfar or Forfarshire, where Gilbert, son of Gillebride, 1st Earl of Angus, obtained a charter of the lands of Purin, Ogguluin and Kynmethan, in Angus between 1172 and 1177. Gilbert is also on record as a witness of a grant of the church of Monyfode to the Abbey of Arbroath by his brother, Gilchrist, 3rd Earl of Angys between 1201-04. There is also early record of an Alexander de Oggoluin, who had a Charter of the lands of Belauht around 1232. Patrick Oggelville or Eggilvyn (of county Forfar) swore an oath of allegiance to King Edward the 1st of England in 1296.

Early History of the Ogilvy family

Spelling variations of this family name include: Ogilvie, Ogilvy, Oguilvie, Ogilby, Ogleby and many more.

Notable amongst the Clan at this time was Saint John Ogilvie (1579-1615), a Jesuit priest, and a cadet of Ogilvy of Findlater, who was arrested and hanged at Glasgow Cross for his defense of the spiritual supremacy of the papacy. He was beatified...
Another 43 words (3 lines of text) are included under the topic Early Ogilvy Notables in all our PDF Extended History products and printed products wherever possible.

Ogilvy migration to the United States +

Ogilvy Settlers in United States in the 17th Century

Ogilvy Settlers in United States in the 18th Century

Ogilvy Settlers in Australia in the 19th Century

Ogilvy Settlers in New Zealand in the 19th Century