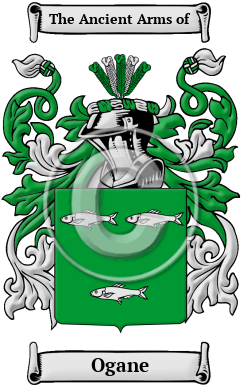 The surname Ogane is an old Irish name that originally appeared in Gaelic as O Cathain or Mac Cathain.

Early Origins of the Ogane family

The surname Ogane was first found in County Londonderry (Irish: Doire), a Northern Irish county also known as Derry, in the province of Ulster.

Early History of the Ogane family

Spelling variations of this family name include: Kane, Kayne, O'Kane, Cain, O'Cain and others.

Prominent amongst the family at this time was Richard Kane (1666-1736?), Irish brigadier-general, born at Down, Ireland, 20 Dec. 1666, and entered the royal regiment of Ireland -since the 18th royal Irish foot - about 1689. According to the War Office Kane died on 9 Jan. 1737 (Cannon, 9th Foot), and...
Another 50 words (4 lines of text) are included under the topic Early Ogane Notables in all our PDF Extended History products and printed products wherever possible.

Migration of the Ogane family

Some of the first settlers of this family name or some of its variants were: Charles Kane settled in New London Conn. in 1811 with his family; Charles, David, Francis, Henry, James, John, Michael, Patrick, Thomas and William Kane, who all arrived in Philadelphia between 1840 and 1870.