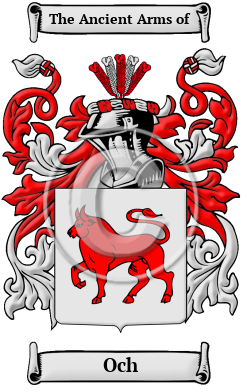 The Och family name first began to be used in the German state of Bavaria. After the 12th century, as hereditary surnames began to be adopted, names that were derived from locations became particularly common. The family name Och is a local surname. Originally denoting the proprietorship of an estate or influence within a village, the German preposition von, which means from or of, used with local names, was taken as a mark of aristocracy. The surname Och was given to someone who lived in Franconia, where their name rose to prominence through their involvement in the social and cultural affairs of the area. Their seat and land holdings were in the free canton of Gebuerg. The ancestral home of the Och family is found in the Rhineland. Och is of several possible origins, all of which derive from a common root; the name comes from the Middle High German ochs, meaning "ox." It may have originated from a nickname, referring to "one as stubborn as an ox." Alternatively, the original bearer of the name may have been someone who kept or sold oxen. Finally, the surname may be derived from a place of residence distinguished by a sign; in this case, the name would indicate "one who dwelled in the house with the sign of the ox."

Early Origins of the Och family

The surname Och was first found in the Rhineland, where the Och family became a prominent contributor to the development of the district from ancient times. The earliest known bearer of the name was Hans Ochslin, who was a resident of Waldsee in 1536. Always prominent in social affairs, the young Och family became an integral part of that turbulent region as it emerged to form alliances with other families within the Feudal System and the nation.

Early History of the Och family

This web page shows only a small excerpt of our Och research. Another 155 words (11 lines of text) covering the years 1554, 1752, 1802, 1810, and 1821 are included under the topic Early Och History in all our PDF Extended History products and printed products wherever possible.

Many cultural groups lived in the German states in medieval times. Each had its own dialect and traditions, and unique variations of popular names. Low German, which is similar to contemporary Dutch, was spoken in Westphalia. German names are characterized by additions such as regional suffixes and phrases that tell something about the origin or background of its original bearer. Further contributing to the variation in German names was the fact that there were no spelling rules in medieval times: scribes recorded names according to their sound. The recorded spelling variations of Och include Ochs, Ochss, Ochse, Och, Ochsse, Ocks, Ockss, Ockse, Ocksse, Osse (northern Germany), Oexle (Swabia), Oxle (Swabia), Oechsle, Ochsner, Exline, Echslin, Oxle, Ochslein ("little ox") and many more.

Prominent among members of the name Och in this period include Peter Ochse from Gieselfeld (around 1554), a member of the Danish branch of the family who moved to Ravensburg where he became a major in the Bavarian army. According to Saxon...
Another 41 words (3 lines of text) are included under the topic Early Och Notables in all our PDF Extended History products and printed products wherever possible.

Och migration to the United States +

Och Settlers in United States in the 18th Century

Och Settlers in United States in the 19th Century