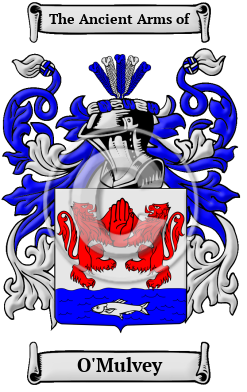 Early Origins of the O'Mulvey family

The surname O'Mulvey was first found in County Derry, where they were hereditary ollavs of O'Cahan (O'Kane.) One of the first records of the name was O Maiol Mheanna mentioned in the Annals of Ulster in 1164 where the family claim descent for the from Eoghan, son of Niall of the None Hostages and was probably associated with the river Meana which flowed into Lough Neagh at Randalstown. [1]

Early History of the O'Mulvey family

This web page shows only a small excerpt of our O'Mulvey research. Another 142 words (10 lines of text) covering the years 1659, 1770 and 1845 are included under the topic Early O'Mulvey History in all our PDF Extended History products and printed products wherever possible.

Spelling variations of this family name include: O'Mulvany, Mulvany, Mulvenna, O'Mulvey, Mulvey and many more.

More information is included under the topic Early O'Mulvey Notables in all our PDF Extended History products and printed products wherever possible.

Migration of the O'Mulvey family