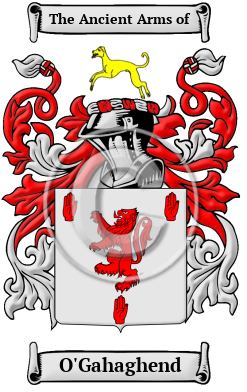 The original Gaelic form of the O'Gahaghend surname is Mag Eochagain, a patronymic derived from the personal name Eochaidh.

Early Origins of the O'Gahaghend family

The surname O'Gahaghend was first found in the county of Westmeath (Irish: An Iarmhí) in the Irish Midlands, province of Leinster, in the barony of Moycashel at Kilbeggan where they held a family seat from ancient times. Traditionally, the O'Gahaghends are said to descend from Fiacha, son of Niall of the Nine Hostages.

Early History of the O'Gahaghend family

Names written in official documents were generally spelt as they sounded, leading to the problem of one name being recorded under several different variations, creating the illusion in records of more than one person. Among the many spelling variations of the surname O'Gahaghend that are preserved in documents of the family history are Geoghegan, Gagahan, Gahagan, Gahaghan, Gaghan, Gegan, MacGeoghegan, Geohan and many more.

Prominent amongst the family at this time was Conal MacGeoghegan (circa 1580-1650) Chief of the sept MacGeoghegan, historian who translated the Annals of Clonmacnoise; James MacGeoghegan (1702-1763) of Westmeath, an ordained priest in Paris, who wrote a "History of Ireland;" and Edward Geoghegan of Dublin was one of the most eminent surgeons of his time (early 1800s). Usher Gagahan (d. 1749), was an Irish classical scholar, belonged to a good family of Westmeath, Ireland; was educated at Trinity College, Dublin, but took...
Another 80 words (6 lines of text) are included under the topic Early O'Gahaghend Notables in all our PDF Extended History products and printed products wherever possible.

Migration of the O'Gahaghend family

The 19th century saw a great wave of Irish migrating out of their homeland in a great measure due to the oppressive imperial policies of the English government and landowners. Many of these Irish families sailed to North America aboard overcrowded passenger ships. By far, the largest influx of Irish immigrants to North America occurred with Great Potato Famine during the late 1840s. These particular immigrants were instrumental in creation of the United States and Canada as major industrial nations because the many essential elements such as the roadways, canals, bridges, and railways required an enormous quantity of cheap labor, which these poor immigrants provided. Later generations of Irish in these countries also went on to make valuable contributions in such fields as the arts, commerce, politics, and education. Extensive research into immigration and passenger lists has revealed many early immigrants bearing the name O'Gahaghend: Michael Geoghegan, a Scotch-Irish who arrived in Boston in 1737; Edward Geoghegan, who came to Philadelphia in 1741; John McGeogh, who arrived in America in 1742.