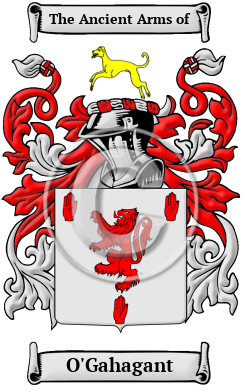 The original Gaelic form of the O'Gahagant surname is Mag Eochagain, a patronymic derived from the personal name Eochaidh.

Early Origins of the O'Gahagant family

The surname O'Gahagant was first found in the county of Westmeath (Irish: An Iarmhí) in the Irish Midlands, province of Leinster, in the barony of Moycashel at Kilbeggan where they held a family seat from ancient times. Traditionally, the O'Gahagants are said to descend from Fiacha, son of Niall of the Nine Hostages.

Early History of the O'Gahagant family

Numerous spelling variations of the surname O'Gahagant exist. A partial explanation for these variants is that ancient scribes and church officials recorded names as they were pronounced, often resulting in a single person being recorded under several different spellings. Different spellings that were found include Geoghegan, Gagahan, Gahagan, Gahaghan, Gaghan, Gegan, MacGeoghegan, Geohan and many more.

Prominent amongst the family at this time was Conal MacGeoghegan (circa 1580-1650) Chief of the sept MacGeoghegan, historian who translated the Annals of Clonmacnoise; James MacGeoghegan (1702-1763) of Westmeath, an ordained priest in Paris, who wrote a "History of Ireland;" and Edward Geoghegan of Dublin was one of the most eminent surgeons of his time (early 1800s). Usher Gagahan (d. 1749), was an Irish classical scholar, belonged to a good family of Westmeath, Ireland; was educated at Trinity College, Dublin, but took...
Another 80 words (6 lines of text) are included under the topic Early O'Gahagant Notables in all our PDF Extended History products and printed products wherever possible.

Migration of the O'Gahagant family

Many destitute Irish families in the 18th and 19th centuries decided to leave their homeland, which had in many ways been scarred by English colonial rule. One of the most frequent destinations for these families was North America where it was possible for an Irish family to own their own parcel of land. Many of the early settlers did find land awaiting them in British North America, or even later in America, but for the majority of immigrants that arrived as a result of the Great Potato Famine of the late 1840s the ownership of land was often a long way off. These Irish people were initially put to work on such industrial projects as the building of bridges, canals, and railroads, or they worked at manufacturing positions within factories. Whenever they arrived, the Irish made enormous contributions to the infant nations of Canada and the United States. Some of the earliest immigrants to bearer the name of O'Gahagant were found through extensive research of immigration and passenger lists: Michael Geoghegan, a Scotch-Irish who arrived in Boston in 1737; Edward Geoghegan, who came to Philadelphia in 1741; John McGeogh, who arrived in America in 1742.