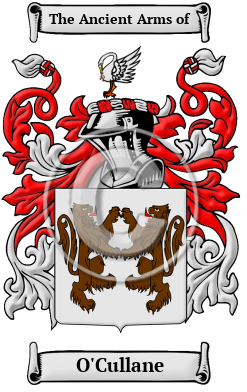 Although Collins is a common English name, O'Cullane is also an indigenous Irish name, derived from the Irish Gaelic "O'Coileain."

Early Origins of the O'Cullane family

The surname O'Cullane was first found in North Desmond the ancient Kingdom of Deis Muin (Desmond), located on the southwest coast of Ireland in the province of Munster, later part of County Limerick, where they were lords of the baronies of Connello and lords of Eighter Conghalach (Lower Connello). By the 13th century, they had moved south and settled in West Cork, having been driven out of their original territories by the Geraldines.

Early History of the O'Cullane family

This web page shows only a small excerpt of our O'Cullane research. Another 31 words (2 lines of text) covering the years 1553, 1602, 1754, and 1817 are included under the topic Early O'Cullane History in all our PDF Extended History products and printed products wherever possible.

One explanation for the many variations is that scribes and church officials frequently spelled the name as it sounded: an imprecise method at best. Understandably then, various spellings of the surname O'Cullane were found in the many archives researched. These included Collins, Colins, O'Cullane, Cullane and others.

Another 34 words (2 lines of text) are included under the topic Early O'Cullane Notables in all our PDF Extended History products and printed products wherever possible.

Migration of the O'Cullane family