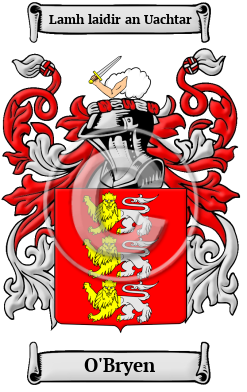 The old Gaelic name used by the O'Bryen family in Ireland was O Briain, which means descendant of Brian.

Early Origins of the O'Bryen family

The surname O'Bryen was first found in Thomond, a territory comprised of most of County Clare with adjacent parts of counties Limerick and Tipperary. Prior to the 10th century, the sept was a Dalcassian Clan known as the Ui Toirdealbhaigh and achieved prominence with the rise of their eponymous ancestor, Brian Boru (941-1014), to the High Kingship of Ireland. Brian Boru, by far the most outstanding figure of this family, is widely acknowledged as the greatest of all the ancient Kings of Ireland and is best remembered for driving the Norsemen out of Ireland at the Battle of Clontarf in 1014.

Early History of the O'Bryen family

Irish names recorded during the Middle Ages are characterized by many spelling variations. This preponderance of variations for common names can be explained by the fact that the scribes and church officials that kept records during that period individually decided how to capture one's name. These recorders primarily based their decisions on how the name was pronounced or what it meant. Research into the name O'Bryen revealed many variations, including O'Brien, OBrine, O'Brion, O'Bryan, O'Bryen, McBrien, McBrine, Brian, Briand, Briant, Brine, Brines, Briens and many more.

Notable amongst the family name at this time was Brian Sreamhach MacMathghamhna O'Brien, king of the Irish region of Thomond (1369-1400); Daniel O'Brien (1577-1663), member of the Supreme Council of Catholic Confederates; Daniel O'Brien (d. 1690), founder of the Irish Brigade known as Clare's Dragoons; Murrough McDermod O'Brien, 1st Earl of Inchiquin and 6th Baron Inchiquin (1614-1674); Henry O'Brien, Lord Ibrackan or Lord...
Another 63 words (4 lines of text) are included under the topic Early O'Bryen Notables in all our PDF Extended History products and printed products wherever possible.

O'Bryen Settlers in Australia in the 19th Century