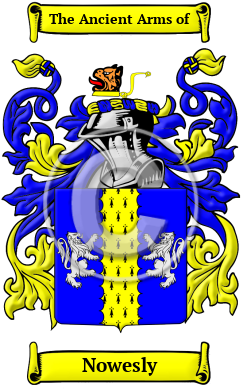 The Anglo-Saxon name Nowesly comes from the family having resided in the township of Knowsley in the parish of Huyton in the county of Lancashire. In 1086, at the time of the Domesday survey Knowsley was considered a part of Cheshire due to the fact that the county of Lancashire was not created until 1182. The parish of Huyton is also known as Huyton-with-Roby in Liverpool.

Early Origins of the Nowesly family

The surname Nowesly was first found in Lancashire at Knowsley, now a large village and civil parish within the Metropolitan Borough of Knowsley in Merseyside. More commonly known as Knowsley Village, the village dates back to the Domesday Book where it was listed as Chenulueslei and literally meant "woodland clearing of a man called Cenwulf or Cynewulf," from the Old English personal name + "leah." [1] "This place was early held by a family of the local name. It became the property of the Lathom family by the marriage of Sir Robert de Lathom with Catherine, daughter and heiress of Thomas de Knowsley." [2] The oldest Thomas de Knowesley was born in the year 1200 and died in Picardie, France in 1259. His son Sir Thomas de Knowsley, born in 1245 and died in 1259 at the age of 14 had no issue.

Early History of the Nowesly family

Nowesly has been spelled many different ways. Before English spelling became standardized over the last few hundred years, spelling variations in names were a common occurrence. As the English language changed in the Middle Ages, absorbing pieces of Latin and French, as well as other languages, the spelling of people's names also changed considerably, even over a single lifetime. Spelling variants included: Knowsley, Knowesley, Knowsly, Knowslie, Nicely and many more.

More information is included under the topic Early Nowesly Notables in all our PDF Extended History products and printed products wherever possible.

Migration of the Nowesly family

In an attempt to escape the chaos experienced in England, many English families boarded overcrowded and diseased ships sailing for the shores of North America and other British colonies. Those families hardy enough, and lucky enough, to make the passage intact were rewarded with land and a social environment less prone to religious and political persecution. Many of these families became important contributors to the young colonies in which they settled. Early immigration and passenger lists have documented some of the first Noweslys to arrive on North American shores: Agnes Knowsley, aged 42, who arrived at New Zealand in 1920; Effa Allan Knowsley, aged 20, who arrived at Wellington, New Zealand in 1920; Florence Leonora Knowsley, aged 40, who arrived at Ellis Island from Ranwell, England in 1914.