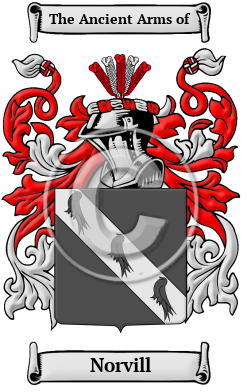 The Norvill surname is thought to be derived from the name of a place in England named Northwell in Nottinghamshire. The name of this place combines the old English term for "north" with other geographic features such as "welle," meaning "a well or spring." [1]

There are also no doubt instances of this name that are derived from a shortened form of the Scottish name Normanville (ultimately of Norman French origin).

Early Origins of the Norvill family

The surname Norvill was first found in Sussex where Henry de Northwelle was registered in 1296 during the reign of King Edward I. [2]

Early History of the Norvill family

Another 36 words (3 lines of text) are included under the topic Early Norvill Notables in all our PDF Extended History products and printed products wherever possible.

Norvill migration to the United States +

Norvill Settlers in United States in the 17th Century

Norvill Settlers in United States in the 18th Century