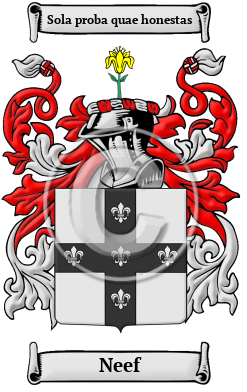 The Neef surname is derived from a place called Nevay in Angus.

Early Origins of the Neef family

The surname Neef was first found in Angus (Gaelic: Aonghas), in the territorial origin from Nevay, a former parish now united to Essie. [1]

Early History of the Neef family

Notable among the family at this time was John Nevay (died 1672), a Scottish Covenanter who after the Resortaion was banished by the privy council to Holland. John Nevay (1792-1870) the Scottish poet, was born in Forfar on 28 January 1792, the...
Another 40 words (3 lines of text) are included under the topic Early Neef Notables in all our PDF Extended History products and printed products wherever possible.

Neef migration to the United States +

Neef Settlers in United States in the 18th Century

Neef Settlers in United States in the 19th Century