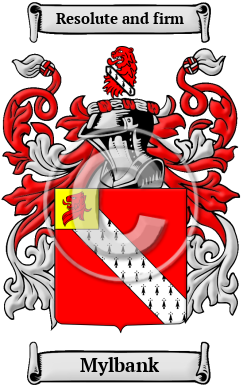 Early Origins of the Mylbank family

The surname Mylbank was first found in Northumberland. However, some of the family were found at early times in the township of Snape in the North Riding of Yorkshire. Snape Castle was held by many families but "Thorpe Perrow, the seat of Mr. [Mark] Milbank Esq., is a handsome mansion here, surrounded by an extensive park and fine plantations. A chapel which formerly belonged to the castle, has been beautifully fitted up by Mr. Milbank, and divine service is performed in it by the vicar of Well." [1]

Early History of the Mylbank family

This web page shows only a small excerpt of our Mylbank research. Another 81 words (6 lines of text) are included under the topic Early Mylbank History in all our PDF Extended History products and printed products wherever possible.

Spelling variations of this family name include: Milbank, Milbanke and others.

More information is included under the topic Early Mylbank Notables in all our PDF Extended History products and printed products wherever possible.

Migration of the Mylbank family