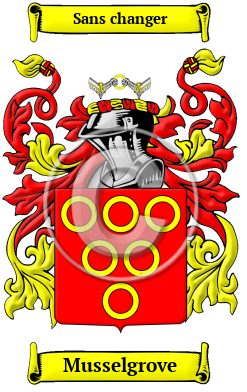 As a surname, Musselgrove was derived from a place name in Cumberland. It comes from the Old English words "mus" meaning "mouse" and "graf" or "grove." [1]

Early Origins of the Musselgrove family

The surname Musselgrove was first found in Herefordshire where "Robert de Mucelgros is mentioned about 1080 and Roger de Mucelgros, in 1086, was a tenant-in-chief [3] where he has left his name to Lude Muchgros. His descendants spread far and wide. Charlton Musgrove in Somersetshire was, with other manors, held by Richard de Mucegros in the time of King John; and he was also farmer of the county of Gloucester." [2]

Early History of the Musselgrove family

Migration of the Musselgrove family to Ireland

Some of the Musselgrove family moved to Ireland, but this topic is not covered in this excerpt. More information about their life in Ireland is included in all our PDF Extended History products and printed products wherever possible.

Migration of the Musselgrove family