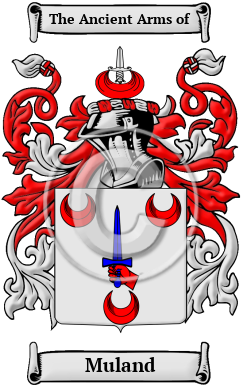 Early Origins of the Muland family

The surname Muland was first found in the province of Connacht (Irish: Connachta, (land of the) descendants of Conn) where the Mullen, Mullin and Mullan spellings were popular. They were descended from the Kings of Connacht and are of the same basic stock as the O'Concannons. Branches were also found in Cork, Limerick, and Clare where the Mullane and Mullins spellings were the most frequent. Some were found north in Ulster and Tyrone and Derry. [1] This latter group is difficult to trace as the Scottish MacMullen or McMullen settled there during Cromwell's Plantation of Ulster.

Early History of the Muland family

This web page shows only a small excerpt of our Muland research. Another 53 words (4 lines of text) covering the years 1729, 1660 and 1720 are included under the topic Early Muland History in all our PDF Extended History products and printed products wherever possible.

Pronunciation, rather than spelling, guided scribes and church officials when recording names during the Middle Ages. This practice often resulted in one person's name being recorded under several different spellings. Numerous spelling variations of the surname Muland are preserved in these old documents. The various spellings of the name that were found include Mullan, Mullen, Mullin, Mullens, Mullins, O'Mullen, O'Mullan, O'Mullin, McMullen and many more.

Notable among the family name at this time was Allan Mullen, M.D., (born c. 1660), one of the most eminent Irish anatomists; Dr. James Mullen, self educated doctor; Rev. John McMullen, Bishop...
Another 31 words (2 lines of text) are included under the topic Early Muland Notables in all our PDF Extended History products and printed products wherever possible.

Migration of the Muland family

During the 19th century thousands of impoverished Irish families made the long journey to British North America and the United States. These people were leaving a land that had become beset with poverty, lack of opportunity, and hunger. In North America, they hoped to find land, work, and political and religious freedoms. Although the majority of the immigrants that survived the long sea passage did make these discoveries, it was not without much perseverance and hard work: by the mid-19th century land suitable for agriculture was short supply, especially in British North America, in the east; the work available was generally low paying and physically taxing construction or factory work; and the English stereotypes concerning the Irish, although less frequent and vehement, were, nevertheless, present in the land of freedom, liberty, and equality for all men. The largest influx of Irish settlers occurred with Great Potato Famine during the late 1840s. Research into passenger and immigration lists has brought forth evidence of the early members of the Muland family in North America: D. B. Mullen settled in Philadelphia with his wife, son and servants, in 1807; Daniel, Bernard, Charles, Edward, Hugh,James, John, Margaret, Michael, Patrick, Peter, Thomas and William Mullen all arrived in Philadelphia between 1840 and 1860.