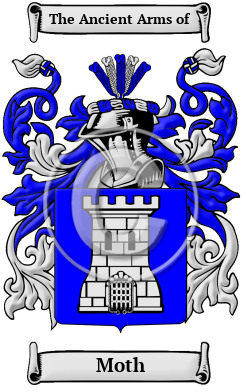 Early Origins of the Moth family

The surname Moth was first found in Lorraine where this distinguished family held a family seat, and were members of the aristocracy of that region from the year 1534.

Early History of the Moth family

This web page shows only a small excerpt of our Moth research. Another 77 words (6 lines of text) are included under the topic Early Moth History in all our PDF Extended History products and printed products wherever possible.

Notable in the family name was Baron Lamoth of Languedoc; Pierre Lambert de la Motte, MEP (1624-1679), a French bishop, a founding member of the Paris Foreign Missions Society and became a missionary in Asia; Antoine Houdar de la Motte (1672-1731), a French author of comedies, operas and ballets; Pierre de St. Paul, Sieur de La Motte (Pierre La Motte or Pierre Lamotte) (d. 1685), French captain of a company of the Carignan-Salieres Regiment that...
Another 74 words (5 lines of text) are included under the topic Early Moth Notables in all our PDF Extended History products and printed products wherever possible.

Moth migration to the United States +

Moth Settlers in United States in the 18th Century

Moth Settlers in United States in the 19th Century

Moth Settlers in Australia in the 19th Century

Historic Events for the Moth family +