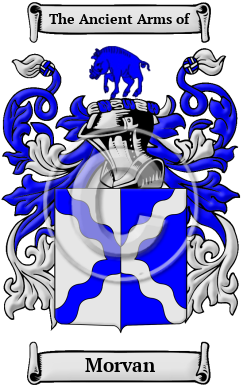 Early Origins of the Morvan family

The surname Morvan was first found in Berwickshire an ancient county of Scotland, presently part of the Scottish Borders Council Area, located in the eastern part of the Borders Region of Scotland, where Hugh de Morville held the Abbey of Selkirk afterwards known as Kelso about the year 1120. He subsequently became Constable of Scotland, and founder of Dryburgh Abbey. His successor, Andrew de Morewic acquired the lands of Selside in Cumberland where they held lands from Roger le Poitevin. Meanwhile in Northumberland, England at Morrick, many of the family held estates at about the same time. "This place was the head of the barony of Morwick, held by Hugh de Morwick in the reign of Edward I.; his ancestors were of considerable note, and distinguished for their wealth and power." [1]

Early History of the Morvan family

This web page shows only a small excerpt of our Morvan research. Another 107 words (8 lines of text) covering the years 1185, 1826 and 1908 are included under the topic Early Morvan History in all our PDF Extended History products and printed products wherever possible.

More information is included under the topic Early Morvan Notables in all our PDF Extended History products and printed products wherever possible.

In France, the name Morvan is the 294th most popular surname with an estimated 13,513 people with that name. [2]

Morvan migration to the United States +

Morvan Settlers in United States in the 19th Century

Morvan Settlers in United States in the 20th Century