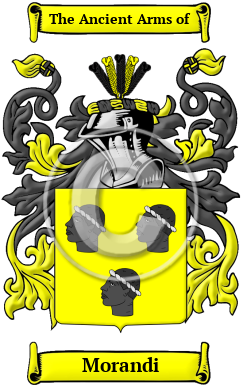 The Morandi surname is a patronymic or plural form of the personal name Morando.

Early Origins of the Morandi family

The surname Morandi was first found in Modena (Etruscan: Mutna; Latin: Mutina; Modenese: Mòdna), a prosperous city at this early time. Records show that Bernardino Morano was a lawyer for the Commune of Modena in 1170.

Early History of the Morandi family

This web page shows only a small excerpt of our Morandi research. More information is included under the topic Early Morandi History in all our PDF Extended History products and printed products wherever possible.

Italian surnames have a surprising number of forms in comparison with other European surnames because they reflect the regional variations and the many dialects of the Italian language, each of which has its distinctive features. For example, in Northern Italy the most standard Italian surname suffix is "I", whereas in Southern Italy the most typical surname suffix is "O". Sardinian is very different from other forms of Italian and in fact, it is considered to be its own distinct language. Additionally, spelling changes frequently occurred because medieval scribes, church officials, and the bearers of names, spelled names as they sounded rather than according to any specific spelling rules. As a consequence of the major changes in the Italian language and in the local spellings of Italian surnames that occurred over the course of history, there are numerous variations for the surname Morandi. These spelling variations include Morana, Morano, Morani, Morandi, Morando, Moranda, Morandini, Morandin and many more.

Prominent among members of the family was the Morano family of Assisi, who owned a castle which they donated to the region of Umbria in the 12th century; Barnaba Morani, a jurist and nobleman of the 14th century; Giacomo Morano, mayor of Modena in 1338-1339; Ricco Morano, a judge and vicar in Parma in 1344; Bernardo Morando (c.1540-1600) Italian architect, who moved to...
Another 63 words (4 lines of text) are included under the topic Early Morandi Notables in all our PDF Extended History products and printed products wherever possible.

Morandi migration to the United States +

The records on immigrants and ships' passengers show a number of people bearing the name Morandi:

Morandi Settlers in United States in the 19th Century