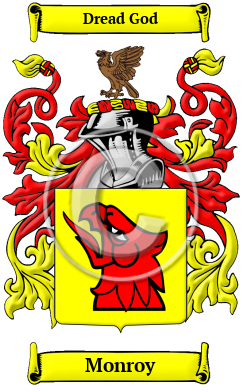 The current generations of the Monroy family have inherited a surname that was first used hundreds of years ago by descendants of the ancient Scottish tribe called the Picts. The Monroy family lived near the foot of the river Roe in the Irish county of Derry. The Gaelic form of the name is Rothach, which means a man of Ro or a man from Ro.

Early Origins of the Monroy family

The surname Monroy was first found in Cromartyshire, where they were descended from Donadl O'Kane and his Irish sept, who left their homeland at the mouth of the river Roe, in Ireland and settler in Ferrindonald in Cromarty, in the 11th century. Other historians suggest the name was originally Monrosse, because they were Mountaineers of Ross. In this case, their traditional origin is from the Siol O'Cain, an ancient Pictish tribe descended from Anselan O'Cain in North Moray, which also produced the Buchanans and the MacMillans.

Early History of the Monroy family

Scribes in the Middle Ages did not have access to a set of spelling rules. They spelled according to sound, the result was a great number of spelling variations. In various documents, Monroy has been spelled Monroe, Monro, Monrow, Munroe, Munro, Munrow and many more.

Notable amongst the Clan from early times was Sir William Munro of Foulis (died 1505), a Scottish Knight and Scottish Clan chief of the highland Clan Munro, by tradition the 12th Baron of Foulis and 15th overall chief of the clan; Robert Monro of the Munro of Obsdale family (died 1680), a famous Scottish General, from the Clan Munro of Ross-shire; Sir George Munro, 1st Baronet of Newmore (1602-1693), Scottish soldier and Member of Parliament; Sir John Munro, 4th Baronet of Foulis (died 1697), 22nd Baron and 25th chief of the Clan Munro; Sir Robert Munro, 5th Baronet of Foulis (died...
Another 120 words (9 lines of text) are included under the topic Early Monroy Notables in all our PDF Extended History products and printed products wherever possible.

In the United States, the name Monroy is the 5,861st most popular surname with an estimated 4,974 people with that name. [1]

Monroy migration to the United States +

The cruelties suffered under the new government forced many to leave their ancient homeland for the freedom of the North American colonies. Those who arrived safely found land, freedom, and opportunity for the taking. These hardy settlers gave their strength and perseverance to the young nations that would become the United States and Canada. Immigration and passenger lists have shown many early immigrants bearing the name Monroy:

Monroy Settlers in United States in the 19th Century

Monroy Settlers in United States in the 20th Century