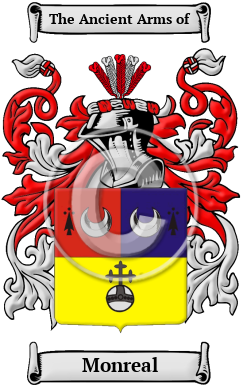 Early Origins of the Monreal family

The surname Monreal was first found in Provence, where this renowned family held a family seat since ancient times.

Several members of the family were distinguished soldiers who served the King honorably. Isaac De Montrond served in the war of Spain from 1637 to 1639 and his valiant conduct earned him two letters of thanks, one from the Marshal de Schomberg and the other from the Count of Tournon. His descendants, Alexandre and Charles, brothers, signed an act dividing their parents' estate between them. Alexandre emigrated to Switzerland and he inherited the estate of his uncle, Paul D'Arbalestier, thus making him the Lord of Montclar and many other lands. Unfortunately, his son, Paul Alexandre, Lord of Plan-de-Baix, La Bastie and Vieillerma-Fays, was seriously injured while fighting in Corsica. He was incarcerated in 1745 at Baix during the persecution of the protestants.

Louis Montreuil was born around 1606-1607 at île-de-France. He first married Marie Chable amd then Marie Grimou in Paris in 1633. He settled in Quebec in the 17th century and he remained there until he passed away on 25th January 1672. His son, Jean, remained in Quebec and carried on the distinguished name of Montreuil. [1]

Early History of the Monreal family

More information is included under the topic Early Monreal Notables in all our PDF Extended History products and printed products wherever possible.

In the United States, the name Monreal is the 11,337th most popular surname with an estimated 2,487 people with that name. [2]

Monreal migration to the United States +

Monreal Settlers in United States in the 19th Century