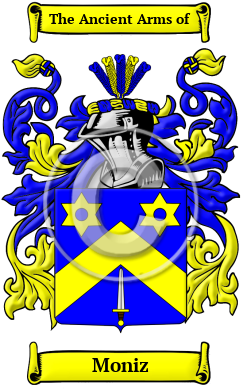 Early Origins of the Moniz family

The surname Moniz was first found in Galicia and Castile, important Christian kingdoms of medieval Spain.

Early History of the Moniz family

This web page shows only a small excerpt of our Moniz research. Another 105 words (8 lines of text) covering the years 1077, 1101, 1684 and 1737 are included under the topic Early Moniz History in all our PDF Extended History products and printed products wherever possible.

Prominent among members of the family were Fernando Muñoz, majordomo in 1101 to King Alfonso VI of Leon and Castile; twelfth century Castilian noblemen Diego Muñoz de Saldaña and Fortun Muñoz Dávalos; Felipa Moniz...
Another 33 words (2 lines of text) are included under the topic Early Moniz Notables in all our PDF Extended History products and printed products wherever possible.

In the United States, the name Moniz is the 3,824th most popular surname with an estimated 7,461 people with that name. [1]

Moniz migration to the United States +

Moniz Settlers in United States in the 19th Century