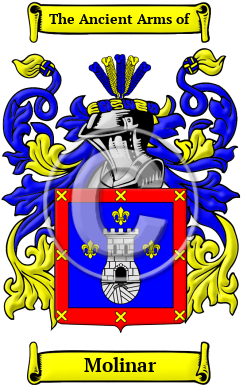 The long and noble heritage behind the name of Molinar first began in medieval Spain. While the patronymic and metronymic surnames, which are derived from the name of the father and mother respectively, are the most common form of a hereditary surname in Spain, occupational surnames also emerged during the late Middle Ages. However, an occupational name did not become a hereditary surname until the office or type of employment became hereditary. The surname Molinar was an occupational name for a person who owned, managed, or worked in a mill. The surname Molinar is derived from the word molino, which means mill or miller.

Early Origins of the Molinar family

The surname Molinar was first found in Castile, an important Christian kingdom of medieval Spain.

Early History of the Molinar family

Prominent among members of the family were thirteenth century Castilian landowners Jimeno de Molina and Pedro Molinero; Alonso de Molina (c. 1513-1579), a Franciscan priest and grammarian, who wrote a well-known dictionary of the Nahuatl language published...
Another 37 words (3 lines of text) are included under the topic Early Molinar Notables in all our PDF Extended History products and printed products wherever possible.

In the United States, the name Molinar is the 16,062nd most popular surname with an estimated 2,487 people with that name. [1]

Molinar migration to the United States +

Molinar Settlers in United States in the 19th Century