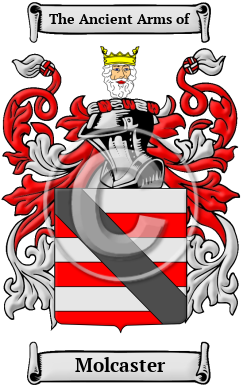 Early Origins of the Molcaster family

The surname Molcaster was first found in Cumberland where they trace their lineage back to the place name Muncaster, home of Muncaster Castle, a privately owned castle overlooking the Esk river, near the west-coastal town of Ravenglass in Cumbria which dates back at least 800 years. Baron Muncaster was a title in Ireland and the United Kingdom held by the Pennington family, traditional owners of Muncaster Castle. The placename "Muncaster" contains the Latin word castra, meaning "encampment", or "fort." [1] "This place, formerly called Meol-Castre, derives its name from a castle. The principal tower of the castle is retained in the mansion built by the late Lord Muncaster." [2]

Walter de Mulcastr was listed in the Assize Rolls of Yorkshire in 1219. [3]

The Writs of Parliament had the first two entries for the family, both in Cumberland: Robert de Molecastre, 1270; and Walter de Mulecastre, 1287. [4]

An early branch of the family was found at Bewaldeth in Cumberland. "[The township] was granted by Alice de Romely to John de Utterfield; after which, the family of Mulcaster had the manor for several descents. In or about the year 1400, Robert de Mulcastre or Mulcaster conveyed it to Robert de Highmore." [2]

Today, Muncaster Castle is a privately owned castle overlooking the River Esk, about a mile east of the west-coastal town of Ravenglass in Cumbria

Early History of the Molcaster family

Notables of the family at this time include Richard Mulcaster (c.1531-1611), English school headmaster, and early British education theorist. He "is commonly said to have been a native of Carlisle. But his most recent biographer, R. H. Quick, on evidence supplied by one of his descendants, considers his birthplace to have been ‘the old border tower of Brackenhill Castle, on the river Line.’ His father, William Mulcaster, was of an old border family, who traced back their history to the time of William Rufus, and had been...
Another 86 words (6 lines of text) are included under the topic Early Molcaster Notables in all our PDF Extended History products and printed products wherever possible.

Migration of the Molcaster family

Some of the first settlers of this family name or some of its variants were: Richard Moncaster, who settled in Barbados in 1635.