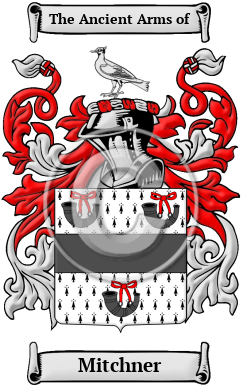 Early Origins of the Mitchner family

The surname Mitchner was first found in Surrey where one of the first records of the name was Henry de Michenhale who was listed there in 1347 in The Place Names of Surrey. Richard Mychenall was listed in the Subsidy Rolls of Sussex in 1512. Thomas Mychinall and John Mychinor were both listed in Surrey in 1583. [1] "Probably from Michen Hall in Godalming, Surrey." [1] Unfortunately, no record can be found today of Michen Hall.

Early History of the Mitchner family

This web page shows only a small excerpt of our Mitchner research. Another 128 words (9 lines of text) covering the years 1510, 1600, 1455 and 1487 are included under the topic Early Mitchner History in all our PDF Extended History products and printed products wherever possible.

More information is included under the topic Early Mitchner Notables in all our PDF Extended History products and printed products wherever possible.

Migration of the Mitchner family