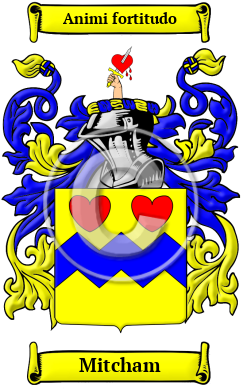 The surname Mitcham is generally thought to be a local surname, derived from the place name Mitcham, County Surrey (today in the London Borough of Merton, London).

Early Origins of the Mitcham family

The surname Mitcham was first found in Surrey at Mitcham, a parish in the union of Croydon, Second division of the hundred of Wallington. "This parish, which is situated on the road to Reigate, is divided into Upper Mitcham, formerly called Whitford or Waterford, and Lower Mitcham, anciently Michelham, or "the great dwelling," a name probably derived from the district having been at an early period the residence of persons of distinction." [1]

Early History of the Mitcham family

This web page shows only a small excerpt of our Mitcham research. Another 64 words (5 lines of text) covering the years 1190, 1273 and 1172 are included under the topic Early Mitcham History in all our PDF Extended History products and printed products wherever possible.

More information is included under the topic Early Mitcham Notables in all our PDF Extended History products and printed products wherever possible.

In the United States, the name Mitcham is the 12,176th most popular surname with an estimated 2,487 people with that name. [2]

Migration of the Mitcham family to Ireland

Some of the Mitcham family moved to Ireland, but this topic is not covered in this excerpt.
Another 66 words (5 lines of text) about their life in Ireland is included in all our PDF Extended History products and printed products wherever possible.

Mitcham migration to the United States +

Mitcham Settlers in United States in the 18th Century

Mitcham Settlers in United States in the 19th Century

Mitcham Settlers in United States in the 20th Century

Mitcham Settlers in Canada in the 20th Century