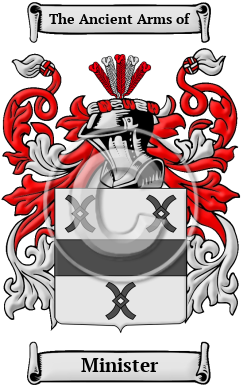 Early Origins of the Minister family

The surname Minister was first found in Cornwall where the family derive their name from Minster, a parish in the deanery of Trigg-Minor, and in the hundred of Lesnewth.

"The word Minster whatever might have been its primitive signification, has been used from time immemorial to import a monastry for Monks, a retired, solitary, religious people, who used artificial music during divine service. Consonant with this import, it appears both from Speed and Dugdale, that at Tolcarne, which signifies the rock chapel or cell, William de Bottreaux about the time of Richard I. founded and endowed an alien priory of black Monks," [1]

Early History of the Minister family

This web page shows only a small excerpt of our Minister research. Another 104 words (7 lines of text) covering the years 1189, 1575, 1610, 1455 and 1487 are included under the topic Early Minister History in all our PDF Extended History products and printed products wherever possible.

Spelling variations of this family name include: Minster, Minsterchamber and others.

More information is included under the topic Early Minister Notables in all our PDF Extended History products and printed products wherever possible.

Minister migration to the United States +

Minister Settlers in United States in the 19th Century

Minister Settlers in United States in the 20th Century

Minister Settlers in Canada in the 20th Century