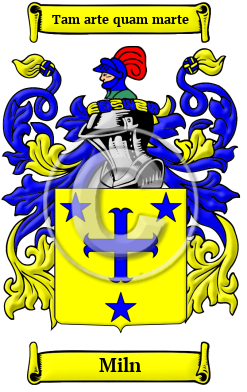 The Miln surname is derived from the Old English word "mylen," which means "mill." As such, it was likely originally an occupational name for a miller, or perhaps for someone who lived near a mill.

Early Origins of the Miln family

The surname Miln was first found in Roxburghshire where they held a family seat from early times and their first records appeared on the early census rolls taken by the early Kings of Scotland to determine the rate of taxation of their subjects.

Early History of the Miln family

Spelling variations of this family name include: Milne, Milnes, Miln, Mylne and others.

Notable amongst the family name during their early history was Walter Milne (died April 1558), the last Protestant martyr to be burned at the stake for heresy in Scotland; John Mylne of Perth (c. 1585-1657), Scottish master mason, Master Mason to the Crown of Scotland; and his son John Mylne...
Another 50 words (4 lines of text) are included under the topic Early Miln Notables in all our PDF Extended History products and printed products wherever possible.

Miln migration to the United States +

Miln Settlers in United States in the 18th Century

Miln Settlers in Australia in the 19th Century

Motto: Tam arte quam marte
Motto Translation: As much by art as strength.