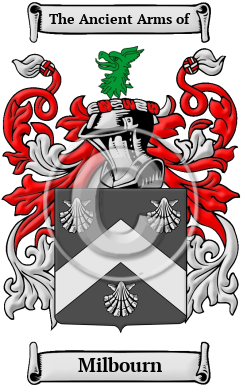 Early Origins of the Milbourn family

The surname Milbourn was first found in Northumberland where they held a family seat from early times and their first records appeared on the early census rolls taken by the early Kings of Britain to determine the rate of taxation of their subjects.

Early History of the Milbourn family

Notable amongst the family name during their early history was Simon Melburn, High Sheriff of Herefordshire in 1464; William Milborne (c 1633-1660), an English landowner and politician who sat in the House of Commons in 1660; Luke Milbourne...
Another 37 words (3 lines of text) are included under the topic Early Milbourn Notables in all our PDF Extended History products and printed products wherever possible.

In the United States, the name Milbourn is the 16,818th most popular surname with an estimated 2,487 people with that name. [1]

Milbourn migration to the United States +

Milbourn Settlers in United States in the 19th Century