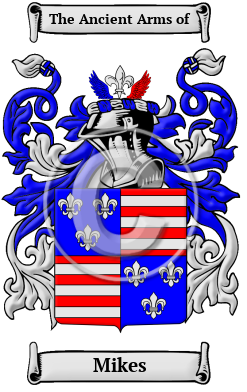 The surname Mikes is likely patronymic in origin, derived from the personal name of the father of the original bearer. In this case, Mikes comes from a short form of Mikusch, which in turn comes from the Slavic personal name Mikolaj. The surname Mikes's association with western Germany and the lands that were once Silesia and Lusatia, now part of Poland, explains it Slavic origin.

Early Origins of the Mikes family

The surname Mikes was first found in Silesia, Lusatia, and Saxony, where the name contributed greatly to the development of an emerging nation which would later play a large role in the tribal and national conflicts of the area. In later years the name branched into many houses, each playing a significant role in the local social and political affairs. Early mentions of the name Mikes in records include Mikusch in Breslau in 1346, Mikusch Schoppe in Niess in 1414, and Niclas Mickisch in Görlitz in 1490.

Early History of the Mikes family

Notables of the period with the surname Mikes were Mihály Mikes (d. 1662), Chancellor of Transylvania (1656-1660); Count Mihály Mikes de Zabola (died 1721), a Hungarian landowner and aristocrat in Transylvania...
Another 31 words (2 lines of text) are included under the topic Early Mikes Notables in all our PDF Extended History products and printed products wherever possible.

Migration of the Mikes family

Some of the first settlers of this family name or some of its variants were: Frederick Mick, John Mick, and Henry Mick, who, along with their families, stopped in England in 1709 en route to America, and Michael and his wife Anna Johanna Kuhn Micksch, who were members of a Moravian church in Philadelphia in 1742. Johan Nickel Mick settled in Philadelphia in 1754. Anna Maria, Catharina, Johan Caspar, and Friedrich Mick settled in Colonial Georgia between 1733 and 1783. August Micksch immigrated to Rio de Janeiro, Brazil in 1851. Anna Mick landed in New York in 1852.