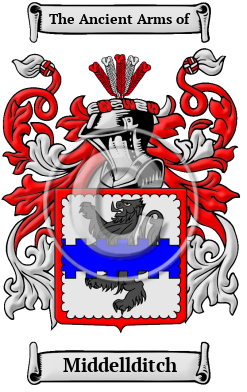 Early Origins of the Middellditch family

The surname Middellditch was first found in Shropshire at Middle, alternately spelt Myddle, Mydle, Midle, M'dle, Meadley and Medle, a parish, in the union of Ellesmere, partly in the liberties of Shrewsbury, but chiefly in the hundred of Pimhill. [1] Myddle Castle was built here c. 1308 by Lord John Le Strange but it fell into ruin and collapsed during the earthquake of 1688. One of the first records of the name was Richard le Midel who was listed in Oxfordshire in the Hundredorum Rolls of 1273. [2] Simon atte Middele was listed in the Subsidy Rolls of Somerset in 1327. [3]

Early History of the Middellditch family

This web page shows only a small excerpt of our Middellditch research. Another 88 words (6 lines of text) covering the years 1270 and 1327 are included under the topic Early Middellditch History in all our PDF Extended History products and printed products wherever possible.

More information is included under the topic Early Middellditch Notables in all our PDF Extended History products and printed products wherever possible.

Migration of the Middellditch family

Some of the first settlers of this family name or some of its variants were: J. Middle arrived in Pennsylvania in 1729.