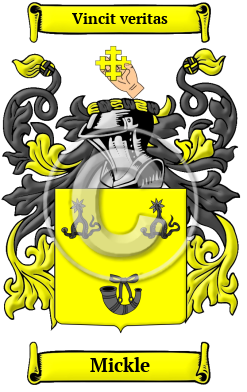 The surname Mickle comes from the Middle Scottish word "meikle," "meikle" and "mekill" which meant "great," or "large." Contrary to what one may think, It is generally believed that the name was not a patronymic variant of the personal name Michael. Today, Meikle Loch is an inland loch in Aberdeenshire; Meikle Millyea, a mountain in South West Scotland; and Meikle Pap, a mountain in North East Scotland. Meikle Earnock is a suburb in the south of Hamilton, Scotland.

Early Origins of the Mickle family

The surname Mickle was first found in Liddesdale, where one of the first records of the name was Willelmus Mykl from the parish of Fyvy who was excommunicated in 1382. A few years later, Robertus Mykyl was a juror on assize in 1389. William Mikil (Mukill) was a juror on an inquest at Narn in 1431. [1]

Early History of the Mickle family

This web page shows only a small excerpt of our Mickle research. Another 66 words (5 lines of text) covering the years 1495, 1501, 1616, 1638 and 1609 are included under the topic Early Mickle History in all our PDF Extended History products and printed products wherever possible.

Spelling variations of this family name include: Meikle, Mickel, Mickle and others.

More information is included under the topic Early Mickle Notables in all our PDF Extended History products and printed products wherever possible.

In the United States, the name Mickle is the 6,587th most popular surname with an estimated 4,974 people with that name. [2]

Mickle migration to the United States +

Mickle Settlers in United States in the 17th Century

Mickle Settlers in United States in the 18th Century

Mickle Settlers in United States in the 19th Century

Mickle Settlers in Australia in the 19th Century

Mickle Settlers in New Zealand in the 19th Century