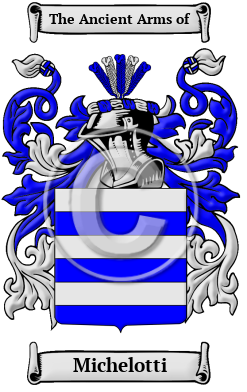 The distinguished surname Michelotti can be traced back to the ancient and beautiful region of Venice. Although people were originally known only by a single name, it became necessary for people to adopt a second name to identify themselves as populations grew and travel became more frequent. The process of adopting fixed hereditary surnames was not complete until the modern era, but the use of hereditary family names in Italy began in the 10th and 11th centuries. Italian hereditary surnames were developed according to fairly general principles and they were characterized by a profusion of derivatives coined from given names. The most common type of family name found in the region of Venice is the patronymic surname, which is derived from the father's given name. During the Middle Ages, Italians adopted the patronymic system of name-making because it perfectly complemented the prevailing Feudal System. In Italy the popularity of patronymic type of surname is also due to the fact that during the Christian era, people often named their children after saints and biblical figures. The surname Michelotti came from the personal name Michele, or Michael in English. If the suffix of the name is "i," the surname denotes the plural form of the name.

Early Origins of the Michelotti family

The surname Michelotti was first found in such areas as Bassano, Verona, Trentino, Vicenza, and even Florence and Bologna. The Michieli family in Venice dates back to 697, where they played an instrumental role in the election of the new doge in the same year. The next record shows Vitale Michieli, who was one of the first tribunes of Venice in 869. This specific lineage went on to produce three more doges: Vitale, Domenico and Vitale II in 1096, 1118, and 1156, respectively. Also among the descendents were nine generals, eleven caretakers of the huge Venetian cathedral of Saint Mark, a cardinal, much chivalry and many senators. One of the earliest records of the family was Domenico Michele, the 35th Doge of Venice who reigned from 1117 to 1130.

Early History of the Michelotti family

Surnames that originated in Italy are characterized by an enormous number of spelling variations. Some of these are derived from regional traditions and dialects. Northern names, for instance, often end in "o", while southern names tend to end in "i". Other variations come from the fact the medieval scribes tended to spell according to the sound of words, rather than any particular set of rules. The recorded variations of Michelotti include DeMicheli, DeMichelis, Megale, Megali, Megalini, Megalizzi, Miai, Miale, Miali, Micale, Micalella, Micaletti, Micaletto, Micali, Micalini, Micalizio, Micalizzi, Micalli, Micallo, Micarelli, Micela, Miceli, Micella, Micelli, Micello, Michela, Michelacci, Michelbgnoli, Michelbn, Michelbngeli, Michelbngioli, Michelani, Michelassi, Michelato, Michelazzi, Michelazzo, Michele, Micheletti and many more.

Prominent among members of the family was Piero Adamo DeMicheli, born in Mantova in 1440, was another noteworthy member of the Michelotti heritage. He was an aristocrat of the court and owned a large villa with many acres of land surrounding it. He married a relative of the Duke of Modena, and eventually introduced the printing press to the city for the first...
Another 62 words (4 lines of text) are included under the topic Early Michelotti Notables in all our PDF Extended History products and printed products wherever possible.

Michelotti migration to the United States +

Research into the origins of individual families in North America has revealed records of the immigration of a number of people bearing the name Michelotti or a variant listed above:

Michelotti Settlers in United States in the 19th Century

Michelotti Settlers in United States in the 20th Century