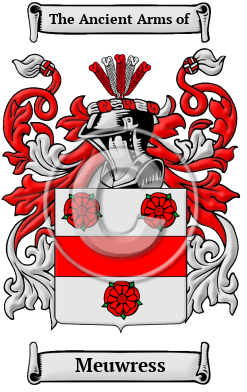 The Meuwress surname is a habitational name taken on from a place near Galashiels in the Scottish Borders.

Early Origins of the Meuwress family

The surname Meuwress was first found in Roxburghshire in Melrose, a market-town and parish, and anciently a burgh of barony where "in the common speech of the district the place name is pronounced Meeros or Meuwress." [1]

Early History of the Meuwress family

This web page shows only a small excerpt of our Meuwress research. Another 81 words (6 lines of text) covering the years 1146, 1530, 1554, 1564 and 1590 are included under the topic Early Meuwress History in all our PDF Extended History products and printed products wherever possible.

More information is included under the topic Early Meuwress Notables in all our PDF Extended History products and printed products wherever possible.

Migration of the Meuwress family