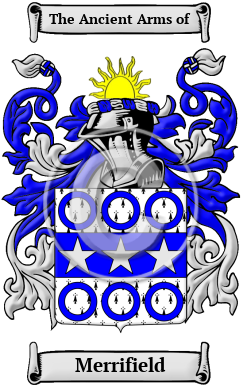 The proud Merrifield family originated in Cornwall, a rugged coastal region in southwestern England. In early times, people were known by only a single name. However, as the population grew and people traveled further afield, it became increasingly necessary to assume an additional name to differentiate between bearers of the same personal name. The manner in which hereditary surnames arose is interesting. Local surnames are derived from where the original bearer lived, was born, or held land. The Merrifield family originally lived in Cornwall, in the village of Merryfield.

Early Origins of the Merrifield family

The surname Merrifield was first found in Cornwall and Devon, where this prominent family flourished. Walter Merifild was recorded in Devon in 1200 but it is believed the family had established itself earlier in St. Columb, Cornwall.

Early History of the Merrifield family

This web page shows only a small excerpt of our Merrifield research. Another 69 words (5 lines of text) covering the years 1273, 1341, 1584, 1621, 1678, 1659 and 1678 are included under the topic Early Merrifield History in all our PDF Extended History products and printed products wherever possible.

Another 36 words (3 lines of text) are included under the topic Early Merrifield Notables in all our PDF Extended History products and printed products wherever possible.

In the United States, the name Merrifield is the 6,744th most popular surname with an estimated 4,974 people with that name. [2]

Merrifield migration to the United States +

In the immigration and passenger lists a number of early immigrants bearing the name Merrifield were found:

Merrifield Settlers in United States in the 19th Century

Merrifield Settlers in Australia in the 19th Century

Merrifield Settlers in New Zealand in the 19th Century