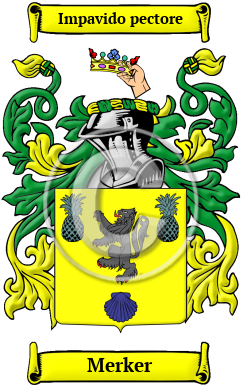 The root of the ancient Dalriadan-Scottish name Merker is the personal name Murchadh, which means sea warrior.The Gaelic form of the name is Mac Mhurchaidh, meaning son of Murchadh. [1]

Two other sources claim the name is from Merchiston (Merchistoun), a place name in Edinburghshire. [2] [3]

Early Origins of the Merker family

The surname Merker was first found in Inverness, where they held a family seat from very ancient times. They are believed to be descended from Murdoch, a natural son of Angus Mor of Islay of the Clan Donald. In the 12th and 13th centuries the name assumed the Gaelic MacMurchie but with the growing economic need to blend into the mainland the name became anglicized to Murchison.

One of the first records of the family was Fowill Morthoison, who was Burgess of Inverness in 1452. Later, John Murchosone was witness in Peebles in 1473 and Findlay Murquhasson and Neill Murquhason or Murquhessoun were tenants in Tiree in 1541. [1]

Early History of the Merker family

Historical recordings of the name Merker include many spelling variations. They include They are the result of repeated translations of the name from Gaelic to English and inconsistencies in spelling rules. Murchison, Murcheson, Murchieson, Murquhouson, Murquhosoun, Murckison and many more.

Notable amongst the Clan from early times was Sir Roderick Impey Murchison, 1st Baronet, KCB, DCL, FRS, HonFRSE, FLS, MRIA (1792-1871), a Scottish geologist who served as director-general of the British Geological Survey from 1855 until his death in 1871. He is noted for investigating and describing the Silurian, Devonian and...
Another 50 words (4 lines of text) are included under the topic Early Merker Notables in all our PDF Extended History products and printed products wherever possible.

Merker migration to the United States +

Descendents of Dalriadan-Scottish families still populate many communities across North America. They are particularly common in Canada, since many went north as United Empire Loyalists at the time of the American War of Independence. Much later, in the late 19th and early 20th centuries, the highland games and Clan societies that now dot North America sprang up, allowing many Scots to recover their lost national heritage. Some of the first immigrants to cross the Atlantic and come to North America bore the name Merker, or a variant listed above:

Merker Settlers in United States in the 18th Century

Merker Settlers in United States in the 19th Century

Merker Settlers in United States in the 20th Century