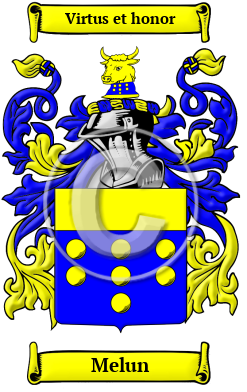 Early Origins of the Melun family

The surname Melun was first found in Ile-de-France, at Mellun, a commune in the Seine-et-Marne department. One of the first records of the name was Robert of Melun (c. 1100-1167), an English-born, scholastic Christian theologian who taught in Mellun, France. Little is known of him other than he studied under Peter Abelard and Hugh of St. Victor at the University of Paris and by 1137, he was a teacher in the school on Mont Ste-Genevieve. He was later involved in the Council of Reims in 1148. After teaching in Paris for 40 years, he was recalled to England by King Henry II in 1160, and was appointed Bishop of Hereford in 1163.

Early History of the Melun family

This web page shows only a small excerpt of our Melun research. Another 185 words (13 lines of text) covering the years 1302, 1465, 1634, 1721, 1598 and 1688 are included under the topic Early Melun History in all our PDF Extended History products and printed products wherever possible.

More information is included under the topic Early Melun Notables in all our PDF Extended History products and printed products wherever possible.

Melun migration to the United States +

Melun Settlers in United States in the 18th Century

Melun Settlers in United States in the 19th Century