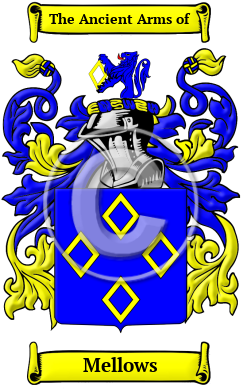 The distinguished surname Mellows emerged among the industrious people of Flanders, which was an important trading partner and political ally of Britain during the Middle Ages. As a result of the frequent commercial intercourse between the Flemish and English nations, many Flemish migrants settled in Britain. In early times, people were known by only a single name. However, as the population grew and people traveled further afield, it became increasingly necessary to assume an additional name to differentiate between bearers of the same personal name. The manner in which hereditary surnames arose is interesting. Local surnames are derived from where the original bearer lived, was born, or held land. Flemish surnames of this type frequently are prefixed by de la or de le, which mean of the or from the. The Mellows family originally lived in Milor in Cornwall. The surname Mellows belongs to the category of habitation names, which are derived from pre-existing names for towns, villages, parishes, or farmsteads.

Early Origins of the Mellows family

The surname Mellows was first found in the parish of Milor in Cornwall. "The parish of Milor derives its name from Melor or St. Melor, to whom the church was dedicated at a very early period. At what exact time St. Melor flourished, is a point that has given rise to much debate. All Towever admit that such a person did exist, that he was a native of Cornwall, was high in dignity, had embraced the Christian faith, and was finally murdered with circumstances of peculiar barbarity. 411, in which chronology he is supported by the authority of Archbishop Usher. Capgrave observes, that “when in the beginning of the Christian faith, the apostolical doctrine was spread into all nations over the world : the gentiles of Britain were converted to the faith, and many believing in the Lord and practising the apostolical precepts, shone with various and miraculous virtues, of the number of which we confidently believe blessed Melor to have been one. For the blessed Melor was of a noble family in Britain, his father being Melian who possessed the dutchy of Cornwall.” An ancient life of this saint or martyr, quoted by Leland, says, that “Melor was the son of Melian king of Cornwall, by Haurilla the daughter of Rivold Earl of Devonshire." [1]

Early History of the Mellows family

This web page shows only a small excerpt of our Mellows research. Another 93 words (7 lines of text) are included under the topic Early Mellows History in all our PDF Extended History products and printed products wherever possible.

More information is included under the topic Early Mellows Notables in all our PDF Extended History products and printed products wherever possible.

Mellows migration to the United States +

Research into the origins of individual families in North America has revealed records of the immigration of a number of people bearing the name Mellows or a variant listed above:

Mellows Settlers in United States in the 17th Century

Mellows Settlers in Canada in the 18th Century