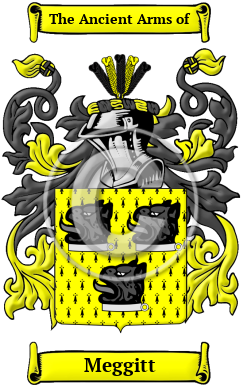 Early Origins of the Meggitt family

The surname Meggitt was first found in Selkirkshire, from the lands of Megget in the parish of Yarrow. One of the first records of the family was Randulf de Meggate, who was one of the witnesses to the perambulation of the merches of Stobo, c. 1190. Meggitt is so ancient, that its origin is buried in such obscurity, as to become very difficult to trace. A very rare name, we must move centuries to find the next record of the family. George Meggot, who was "dompnus" of Neubotle in 1528 may be the George Megot who appears as a tenant of the same abbey in 1563. Later, the name is also found in Edinburgh in 1633 and 1659 as Miggot and Megget. "At Cramalt, on the Crammel, near the middle of the glen, are the remains of an old tower, which, according to the tradition of the country, was the seat of Megget of Megget." [1]

Today, Lyne and Megget is a parish in the county of Peebles (Peebleshire.) "Lyne is about three miles and a half in length and almost three in breadth; while that portion of the parish which was formerly the parish of Megget, situated at the southern extremity of the county, is about six miles in length, and more than five in breadth. A chapel of ease has been erected in the Megget district of the parish, to which is attached a good schoolroom. At Megget are the remains of two ancient towers, probably places of security in case of sudden incursions of the English, to which this place, situated so near the border, was peculiarly exposed; or they might be watch-towers, from which signals of approaching hostilities were displayed for the purpose of raising the country." [2]

Moving south, over the border into England, Yorkshire was home to some of the family. Megota de Rypon (Ripon) was listed at Wakefield in 1309. Here the name is thought to have been a diminutive of Magg, Megg (Margaret) and the spellings Megot and Maggott were found here too. [3]

Robertus Meggot-son was listed in the Yorkshire Poll Tax Rolls in 1379. [4]

Early History of the Meggitt family

This web page shows only a small excerpt of our Meggitt research. Another 112 words (8 lines of text) covering the years 1528, 1563, 1677 and 1705 are included under the topic Early Meggitt History in all our PDF Extended History products and printed products wherever possible.

More information is included under the topic Early Meggitt Notables in all our PDF Extended History products and printed products wherever possible.

Meggitt migration to the United States +

Meggitt Settlers in United States in the 19th Century

Meggitt Settlers in United States in the 20th Century