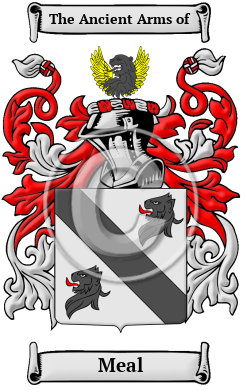 Early Origins of the Meal family

The surname Meal was first found in Cheshire where they held a family seat.This surname is associated with the village of Meolse, which was recorded in the Domesday Book in the year 1086. The lands were described as a coastal village on the southern shore of the Wirral peninsular on the River Dee where Roman and Saxon coins and jewelry were found at Dove Point. Geoffry and Simon de Mele were registered in Cambridgeshire in 1279. North Meols in Lancashire was of great significance to the family in early times.

Early History of the Meal family

This web page shows only a small excerpt of our Meal research. Another 61 words (4 lines of text) covering the years 132 and 1327 are included under the topic Early Meal History in all our PDF Extended History products and printed products wherever possible.

More information is included under the topic Early Meal Notables in all our PDF Extended History products and printed products wherever possible.

Meal migration to the United States +

Meal Settlers in United States in the 17th Century

Meal Settlers in United States in the 19th Century