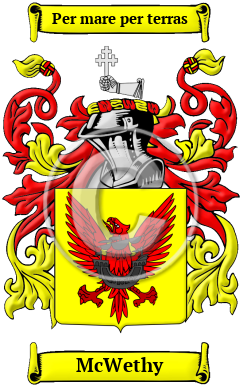 On the Scottish west coast, the McWethy family was born among the ancient Dalriadan clans. Their name comes from the personal name Murdo. The Gaelic form of the surname was Mac Mhurchaidh, meaning son of Murdo. The name Murdo is equivalent to Murdock, and means sea warrior.

Early Origins of the McWethy family

The surname McWethy was first found in south Uist, in the Outer Hebrides (Gaelic: Na h-Eileanan Siar), in the present day Council Area of Western Isles, a region controlled by the Norwegians prior to the Treaty of Perth in 1266, where they held a family seat from early times and their first records appeared on the early census rolls taken by the early Kings of Britain to determine the rate of taxation of their subjects.

Early History of the McWethy family

This web page shows only a small excerpt of our McWethy research. Another 102 words (7 lines of text) covering the year 1506 is included under the topic Early McWethy History in all our PDF Extended History products and printed products wherever possible.

In various documents McWethy has been spelled Since medieval scribes still spelled according to sound, records from that era contain an enormous number of spelling variations. MacMurchie, MacMurchy, MacUrchie, MacWurchie, MacWorthy, MacVurchie, Murchie and many more.

More information is included under the topic Early McWethy Notables in all our PDF Extended History products and printed products wherever possible.

Migration of the McWethy family

Significant portions of the populations of both the United States and Canada are still made up of the ancestors of Dalriadan families. Some of those in Canada originally settled the United States, but went north as United Empire Loyalists in the American War of Independence. The late 19th and early 20th centuries saw the ancestors of many Scots on both sides of the border begin to recover their collective national heritage through Clan societies and highland games. Some of the first North American settlers carried this name or one of its variants: Finlay McMurchie, his wife Catherine, and their five children, who settled in Wilmington, NC in 1774; Hugh McMurchie, his wife Elizabeth, and their five children, who arrived in Wilmington, North Carolina in 1774.